The Italian government has decided to launch two next-generation radar reconnaissance satellites on Soyuz and Vega rockets from French Guiana, and a European Space Agency telescope to study the structures of planets around other stars will likely ride to orbit as a co-passenger on one of the missions.
The Italian Space Agency, or ASI, considered launching the first of the two second-generation Cosmo-SkyMed surveillance satellites on a SpaceX Falcon 9 rocket from Vandenberg Air Force Base in California, but officials ultimately elected to book the launch on a Europeanized version of Russia’s Soyuz rocket next year, ASI announced this week. 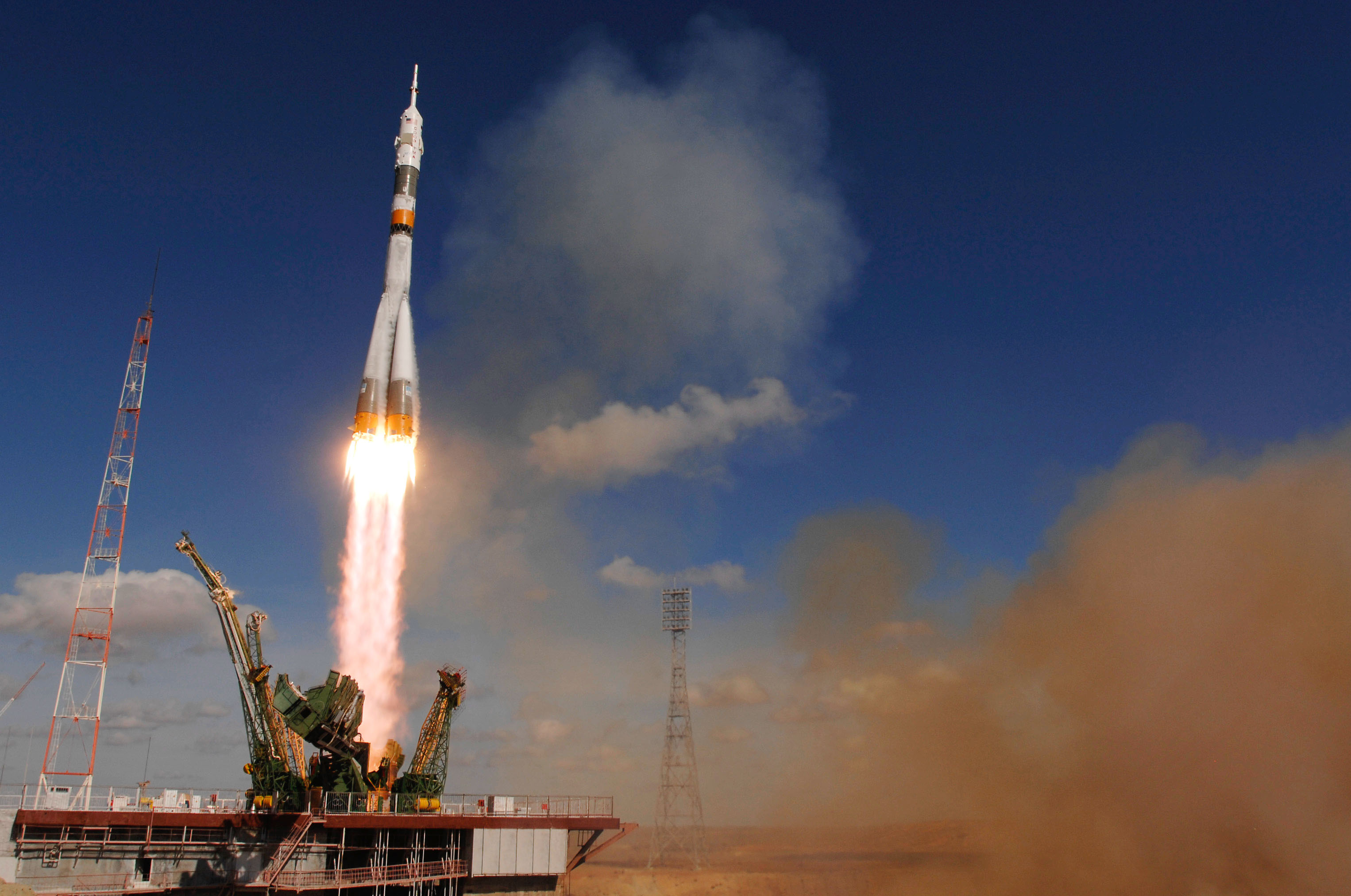 Paradigm’s unique flat panel Swarm45 terminal can now add full worldwide coverage on Inmarsat Global Xpress (GX) to its impressive list of features; a list that includes it being the first GX terminal that can be packed as carry-on baggage on board commercial aircrafts.
In use on multiple platforms and missions today, Global Xpress complements military satellite communications and delivers a highly reliable commercial Ka-band network that meets mobile, on-demand communication needs worldwide. Inmarsat recently granted Type Approval for the Swarm45 terminal as it enhances portability and ease of use of the GX service by offering fast setup and pointing. During successful demonstrations in multiple user scenarios, U.S. government end users were connected in under five minutes, anywhere in the world without requiring specific region configurations or set up procedures.

By the mid-21st century, businesses in nearly every industry on the planet will have to leverage Big Data to stay competitive, according to a panel of experts at the 33rd Space Symposium in Colorado Springs, Colorado. Without an in-house ability to analyze large datasets, running a business will become increasingly difficult, said Chris Boshuizen, entrepreneur in residence at Data Collective VC. And while this isn’t limited to the space industry due to the world’s entry into what he calls a “data-centric economy,” Boshuizen pointed out that space companies in particular are “on average a little behind in terms of the adoption of machine learning … and really using the data as a core part of the business.” 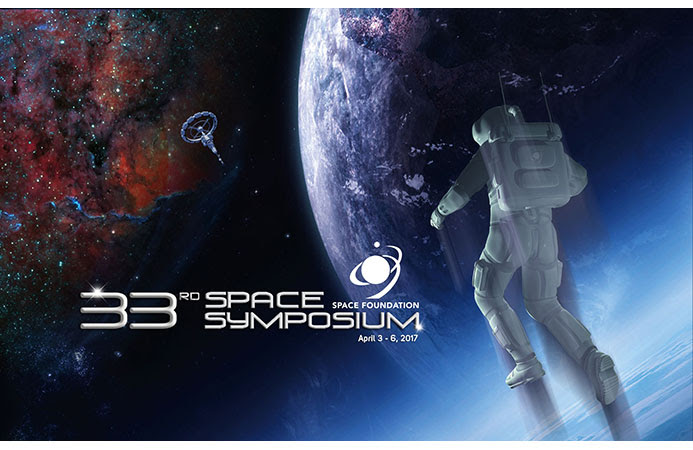 If NASA’s human spaceflight program is redirected back to the Moon, Blue Origin is ready to support it with its proposed “Blue Moon” lunar lander system, company president Robert Meyerson said April 5.
Blue Moon can “cost effectively soft-land large amounts of mass onto the lunar surface,” Meyerson said at the 33rd Space Symposium here, his first public comments about the system since its existence was first reported in March by the Washington Post. “Any credible first lunar settlement is going to require such a capability.” 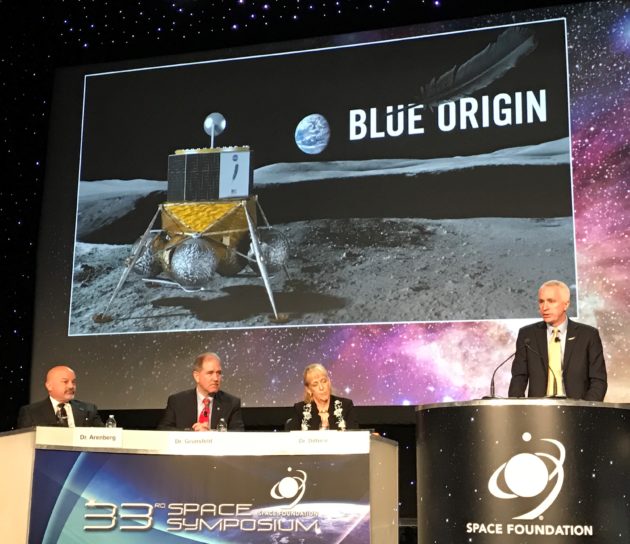 The Swedish Space Corporation (SSC) and BridgeSat announced a long-term partnership under which BridgeSat will install satellite optical communications equipment at a number of SSC’s established Radio Frequency (RF) ground sites.
SSC owns and operates a global network of ground stations to provide secure and reliable access to satellites seeking RF services. BridgeSat is developing a global optical communications network that will offer secure delivery of data from Low Earth Orbit (LEO) satellites at fast speeds and low cost. The partnership creates incentives for the two companies to cooperate commercially for the benefit of their customers in leveraging their respective capabilities in optical and RF satellite communication solutions.

During the Space Foundation’s luncheon honoring Piers Sellers, speakers lauded the former astronaut for his tireless work to draw attention to Earth’s changing climate and to seek technological solutions to limit mankind’s impact on the planet.
James Ellis, a retired U.S. Navy admiral and chairman of the Space Foundation’s Board of Directors, honored Sellers posthumously with the General James E. Hill Lifetime Space Achievement Award. Sellers, a British-born climate scientist and veteran of three space shuttle missions, served as acting director of the NASA Goddard Space Flight Center’s Earth Sciences Division and deputy director of its Goddard Sciences and Exploration Directorate. He died of pancreatic cancer in December 2016. 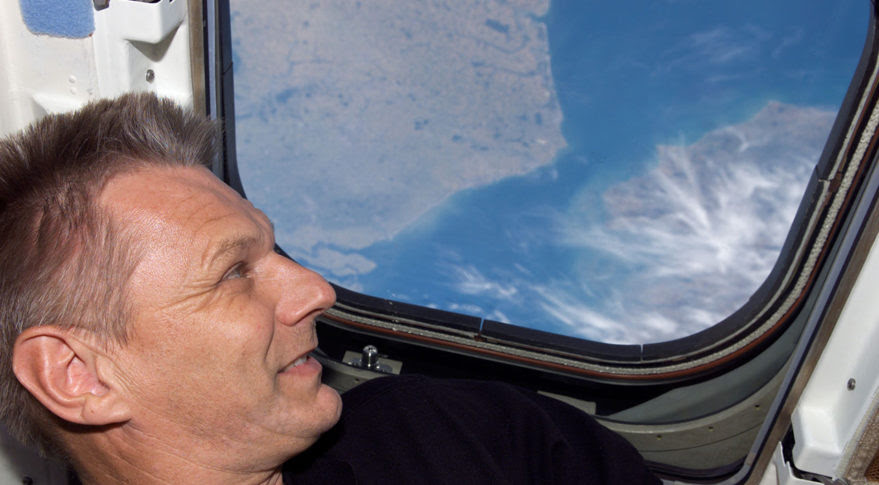 Globalstar announced it will launch a new compression service for the satellite industry. The effort will include rolling out compression services developed by Yippy to Globalstar’s subscribers as well as providing this technology to other Mobile Satellite Service (MSS) providers and Fixed-Satellite Service (FSS) operators. Yippy’s compression technology platform serves to significantly decrease load times for internet data sessions and document retrieval services from corporate intranets.
The technology allows web page content to load in seconds as opposed to minutes with many satellite devices. Using the Yippy Ease 360 platform, the service enables faster download and upload speeds while maintaining a secure connection and reducing critical overhead on satellite networks.

Blue Origin founder Jeff Bezos said April 5 that his company was still hoping to start flying people on suborbital space tourism flights by the end of next year, while suggesting crewed test flights will not start this year as previously planned.
Bezos, speaking in front of the company’s exhibit at the 33rd Space Symposium here that features the New Shepard propulsion module that flew five suborbital spaceflights in 2015 and 2016, backed away from earlier statements that called for flying people on test flights later this year.
“We’re going to go through the test program, and we’ll put humans on it when we’re happy,” he said. “I don’t think it’s going to be 2017 at this point. It could be.” Honeywell announced a new satellite-based connected solution to help governments, companies and other organizations monitor the location and safety of workers in remote locations. The Personal Tracker uses Iridium’s Low Earth Orbit (LEO) satellite network to allow companies to communicate with their workers or track assets anywhere in the world — across oceans, airways and even polar regions.
Emergency services, maritime, military, and oil and gas workers can share their location with Global Positioning System (GPS) coordinates and send text messages using the device, which is certified to function in hazardous environments where explosions or a fire may occur due to flammable liquids or vapors. It can be used as a stand-alone, two-way communications device or can be clipped to a backpack to serve as a tracking beacon. Users can also pair the device with an iPhone to access the Honeywell mobile app that offers features such as interactive SOS, messaging, push notifications, trip information and situational awareness.

Gwynne Shotwell on the Future of Women, and SpaceX, in the Space Industry

Gwynne Shotwell, president and chief operating officer of SpaceX, hopes to see a future where more women are engaged in the space industry. During her speech on the 33rd Space Symposium stage, Shotwell shared a quote from former U.S. representative Bella Abzug, which stated, “Our struggle today is not to have a female Einstein get appointed as an assistant professor. It is for a woman schlemiel to get as quickly promoted as a male schlemiel.” For Shotwell, Abzug’s words still ring true decades later.

Space agency heads see the moon on the path to Mars

With NASA’s long-term strategy for human missions to Mars in flux, heads of several space agencies said they supported initial missions to the moon as a key step before going to Mars.
During an April 4 panel session during the 33rd Space Symposium that featured representatives from 15 agencies, many expressed support for going to Mars only after building up experience at the moon first.
“We think that the moon is also a very important step. Mars is not the ultimate goal,” said Jan Woerner, director general of the European Space Agency. “The moon is an intermediate step to go to Mars, but the moon can also offer some special opportunities.”