SpaceX’s Falcon 9 rocket will deliver 10 satellites to low-Earth orbit for Iridium, a global leader in mobile voice and data satellite communications. The 10 satellites are the first of at least 70 satellites that SpaceX will be launching for Iridium’s next generation global satellite constellation, Iridium NEXT.
SpaceX is targeting launch of Iridium-1 from Space Launch Complex 4E at Vandenberg Air Force Base in California. The instantaneous launch window opens on January 14 at 9:54:39 am PST or 5:54:39 pm UTC. The satellites will begin deployment about an hour after launch.
Following stage separation, the first stage of Falcon 9 will attempt a landing on the “Just Read the Instructions” droneship that will be stationed in the Pacific Ocean.

Why is it Important?

Because as The Wall Street Journal explains: “A cluster of satellites set to launch in the coming days could move the aviation industry closer to overhauling the way air-traffic controllers track planes around the world.
For decades, controllers have used ground-based radar to direct planes over land. More recently, they have been finding aircraft locations via global positioning satellites, or GPS, but they can do so only over land or near the shore. They have had no real-time ability to track planes in flight over oceans, which cover 71% of the planet, or over remote polar regions.
A new satellite-based joint-venture called Aireon LLC would give controllers full visibility by next year, if all goes according to plan, providing real-time flight information from planes over both water and land.” (Carey and Pasztor, 01/13/17)

Overall, Iridium NEXT will dramatically enhance Iridium's ability to meet the growing demand for global mobile communications on land, at sea and in the skies. Iridium enables partners to create innovative products and solutions that haven’t even been conceived of yet, made possible through the flexibility of Iridium’s network. Iridium NEXT will: 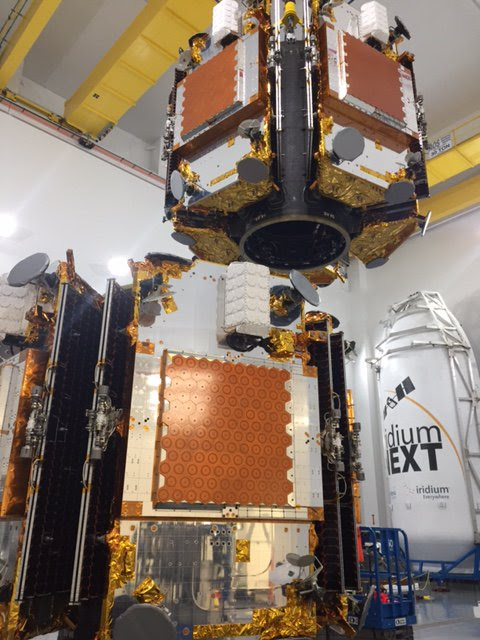