In its first flight in nearly two years, an Orbital ATK Antares successfully launched a Cygnus cargo spacecraft to the International Space Station Oct. 17.
The Antares lifted off from the Mid-Atlantic Regional Spaceport at Wallops Island, Virginia, at 7:45 p.m. Eastern, at the end of a five-minute launch window. The launch shifted from the beginning to the end of the window because of an unspecified but minor engine issue. 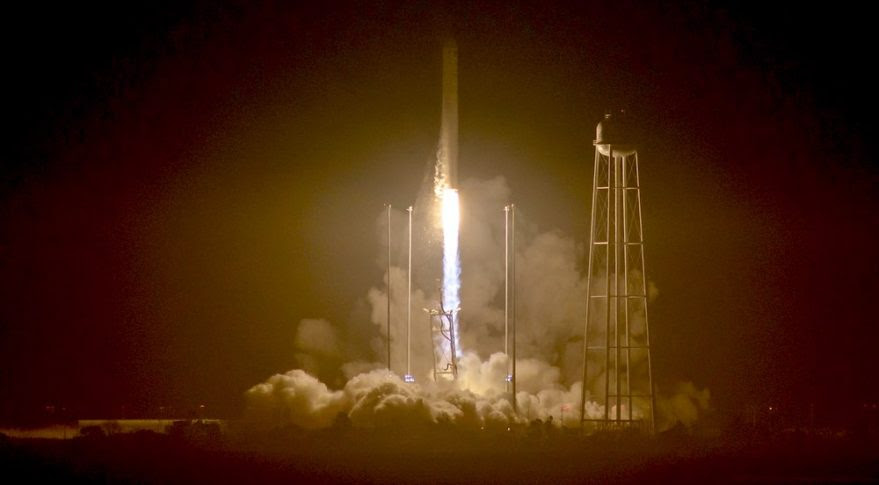 Blue Origin on track for human suborbital test flights in 2017

A “picture perfect” in-flight abort test last week by Blue Origin’s New Shepard suborbital vehicle keeps the company on schedule to begin crewed test flights by the end of next year, the company’s president said Oct. 13.
In a speech at the International Symposium for Personal and Commercial Spaceflight (ISPCS) here, Rob Meyerson said the Oct. 5 test, which demonstrated the ability of the crew capsule to safely escape its booster in an emergency, brings the company closer to start crewed flights. 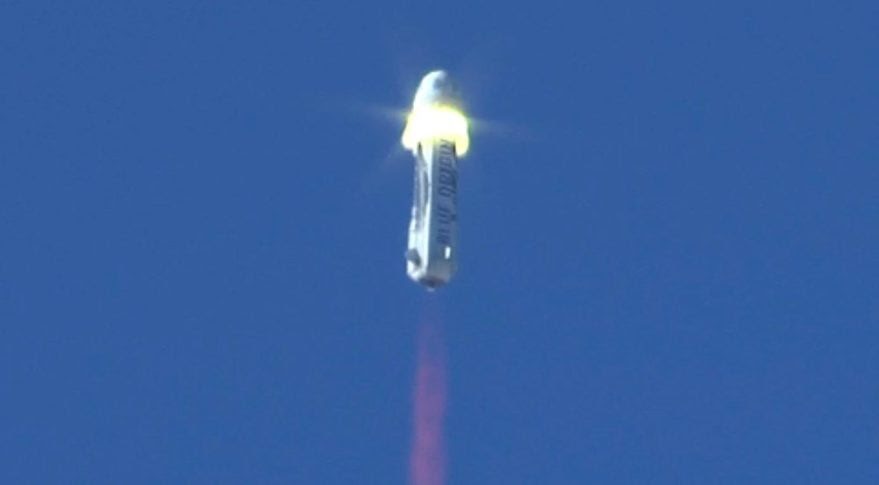 SpaceX plans to reuse a Dragon cargo spacecraft for the first time next year, allowing the company to focus on production of the next generation of that spacecraft for crew and cargo missions.
In a presentation at the International Symposium for Personal and Commercial Spaceflight (ISPCS) here Oct. 13, Benjamin Reed, director of commercial crew mission management at SpaceX, said the company was planning to fly a used Dragon spacecraft on its eleventh Commercial Resupply Services (CRS) cargo mission to the station in early 2017. 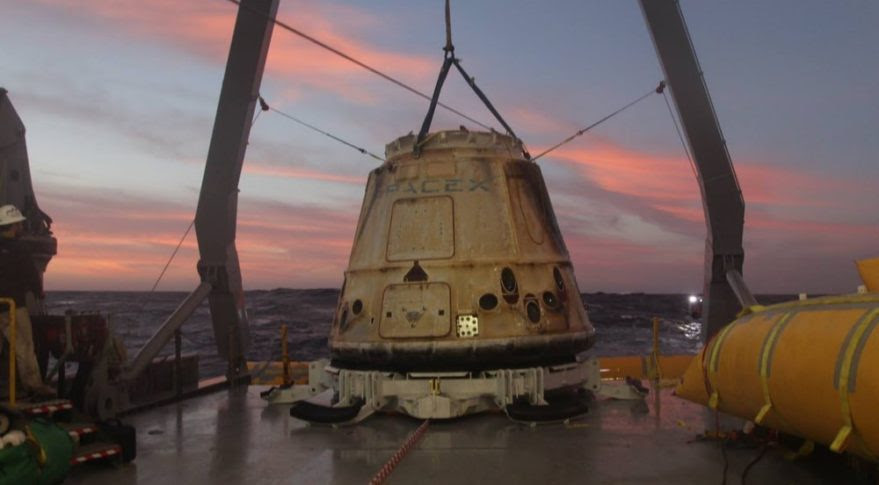 In the Oil and Gas Recovery, Satellite Will Rise

It’s no overstatement: there is seemingly always something going on in the Middle East. And now, with nuclear-related sanctions lifted from Iran, the region has, perhaps, even more eyes on it. The geopolitical implications of Iran are significant; the country has the potential to redefine the Middle Eastern landscape.
Oil rich and with numerous other valuable resources virtually untapped, Iran will likely resuscitate its economy, and the world will feel the wake of this large nation kicking off from the sin-bin pond into the global economy’s flowing river. The first evidence is the shaky price of oil. Iran stepping back from production cuts earlier this year left other members of the Organization of Petroleum Exporting Countries (OPEC) and the oil and gas (O&G) market as a whole in even greater turbulence.

Kymeta has announced performance results of a weeklong live demonstration at the Monaco Yacht Show. The company realized data rates of 65 Mbps down and 6 Mbps up, and also demonstrated 2.9 dB additional gain when combining two Kymeta mTennau7 Antenna Subsystem Modules (ASMs). The demonstration represents a major milestone for the company, which aims to begin pilot production in December.
During the demonstration, Kymeta mTennau7 ASMs simultaneously received eight live Panasonicmulticast eXTV channels, performed multiple live Skype video sessions, multiple HD and Ultra-HDNetflix video sessions, and provided Wi-Fi access to an average of 80 users at any one time during the show. The demonstration also confirmed the low-power consumption of the Kymeta mTenna technology, drawing only 12 watts of power per ASM.

Terra Bella, a Google company, has signed an agreement withSpaceflight Industries to launch SkySats on a SpaceX Falcon 9 rocket. The company will be the co-lead on Spaceflight’s first Sun-Synchronous Orbit (SSO) dedicated rideshare mission, designated SSO-A, purchased in 2015. The mission is currently scheduled to launch from Vandenberg Air Force Base in California in late 2017.
Spaceflight has government and commercial microsats and cubesats booked for the SSO-A mission, and is currently at 90 percent capacity with more than 20 payloads from 10 countries. Confirmed spacecraft include Korea Advanced Institute of Science and Technology’s (KAIST) NEXTSat-1 satellite, an astronomy mission and technology demonstrator; an Iceye Synthetic Aperture Radar (SAR) micro-satellite for all-weather imaging; and HawkEye 360’s first three formation-flying satellites to detect, characterize, and geolocate RF signals worldwide.

Marlink has announced the implementation of Inmarsat Global Xpress (GX) across its global network infrastructure and service delivery platform is now complete. Following successful installation and testing at all three Global Xpress “Meet Me Points” in the Indian Ocean Region, Atlantic Ocean Region and Pacific Ocean Region, Marlink will be able to offer Fleet Xpress globally along with its maritime digital solutions, such as XChange and SkyFile.
Combined with Fleet Xpress, XChange and SkyFile will enable maritime clients and their vessels to achieve further operational efficiencies and cost reductions, as well as boosting crew wellbeing on-board, the company said. Also available to Fleet Xpress users is Marlink’s messaging and data-transfer solution for ship-shore communications, in addition to a solution offering full control for private crew communications (voice, internet access and social media).

Scientists and researchers at the National Science Foundation’s (NSF’s) Amundsen-Scott Station, located at 90 degrees south on the South Pole, are using the Lockheed Martin-built Defense Satellite Communications System (DSCS) satellite DSCS-3-B7 for telecommunications services. Due to the research station’s extreme latitude, communications is difficult even for satellites. In June, the U.S. Air Force satellite took over the role of providing communication and data links between Amundsen-Scott and the U.S. Antarctic Program facility in Christchurch, New Zealand, which serves as the station’s link to the rest of the world.
DSCS-3-B7 replaces the NSF’s GOES 3 satellite, which is being decommissioned. The DSCS satellite provides the station with internet access for 3.5 hours a day at speeds of up to 30 Mbps, an upgrade from about 1.5 Mbps achieved under GOES.

NASA will move ahead later this year with plans to offer a docking port and other resources to companies interested in adding a commercial module to the International Space Station, NASA and the White House said Oct. 11.
In a blog post published on the agency’s web site, NASA Administrator Charles Bolden and Director of the White House Office of Science and Technology Policy John Holdren said that responses the agency received from a request for information (RFI) earlier this year led NASA to decide to proceed with some kind of competition or other mechanism for adding commercial modules to the station. 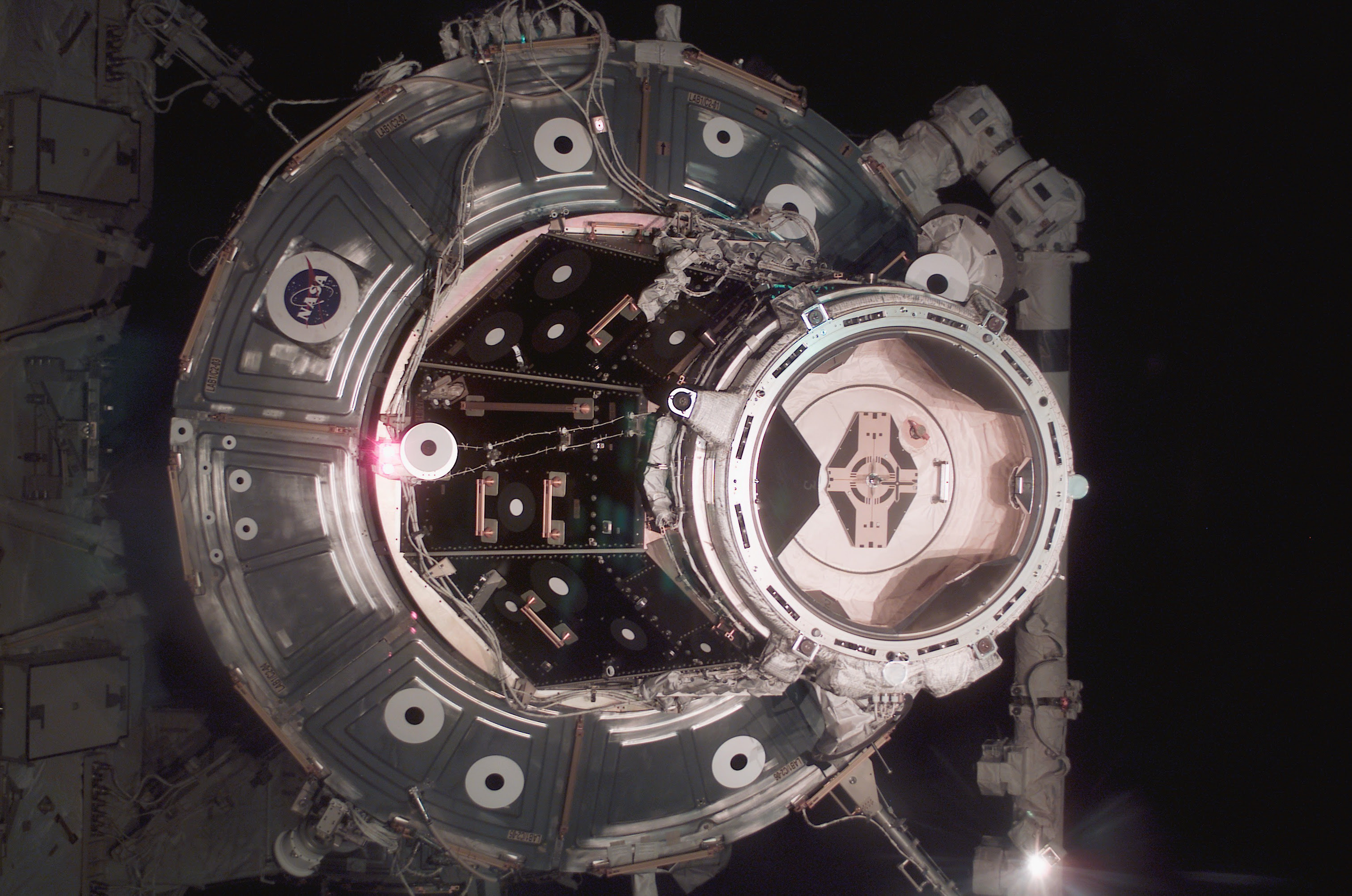 Eutelsat has revealed that the third launch in its Multi-Launch Agreement (MLA) withInternational Launch Services (ILS) will use a Proton Medium rocket, making the operator the first to commit to using one of the new launch vehicle variants. The mission is to occur in the 2019 to 2020 timeframe from the Baikonur Cosmodrome in Kazakhstan.
The Proton Medium mission is the second Eutelsat launch contract announced this week. Yesterday the operator revealed that the newly ordered Eutelsat West 5 B will launch on a Proton Breeze M rocket, also from ILS, on a shared launch with Orbital ATK’s first Mission Extension Vehicle (MEV 1). Eutelsat 5 West B will be stacked on top of MEV 1 for a dual launch in the last quarter of 2018.

Read the full story here
Posted by Unknown at 1:23 PM