WASHINGTON — An explosion on a Florida launch pad early Sept. 1 destroyed a SpaceX Falcon 9 rocket and its payload, the Amos-6 communications satellite, being prepared for an upcoming launch there.
Authorities said the explosion occurred at approximately 9:07 a.m. Eastern at Space Launch Complex 40 at Cape Canaveral Air Force Station, where SpaceX was preparing to conduct a static fire test of the Falcon 9 in advance of a scheduled Sept. 3 launch. The test, which entails briefly firing the rocket’s first stage, is a routine pre-launch procedure for Falcon 9 missions.
SpaceX Chief Executive Elon Musk, in a tweet four hours after the incident, said the explosion originated around the Falcon 9’s the upper stage liquid oxygen tank while it was being loaded in the minutes before the scheduled static fire test. He said there was no information yet on the cause of the explosion.

WASHINGTON — NASA said Sept. 1 that the launch of an asteroid sample return mission from Florida remained on schedule for next week despite the explosion of SpaceX Falcon 9 at a neighboring launch pad.
The Origins, Spectral Interpretation, Resource Identification, and Security-Regolith Explorer (OSIRIS-REx) spacecraft was inside its payload fairing atop a United Launch Alliance Atlas 5 at Cape Canaveral’s Space Launch Complex 41 when the Falcon 9 at the neighboring Space Launch Complex 40, less than two kilometers away, exploded during preparations for a static-fire test on the morning of Sept. 1.
Mike Curie, a NASA spokesman at the Kennedy Space Center, said a few hours after the SpaceX incident that he was not aware of any effects the explosion had on OSIRIS-REx. The agency confirmed that assessment later in the day.

WASHINGTON — NASA announced Sept. 2 that it has approved plans to launch a delayed Mars lander mission in 2018, although at an additional cost that could affect plans for later planetary missions.
The InSight Mars lander, originally scheduled for launch in March, will now launch no earlier than May 5, 2018, after NASA’s Science Mission Directorate formally approved the revised mission plan this week. That launch will allow a landing on Mars in November 2018.
NASA postponed the launch in December 2015 after a series of problems with one of its primary instruments, the Seismic Experiment for Interior Structure (SEIS), provided by the French space agency CNES. The instrument suffered a series of vacuum leaks that NASA concluded could not be fixed in time to permit a launch during a window that lasted about a month. 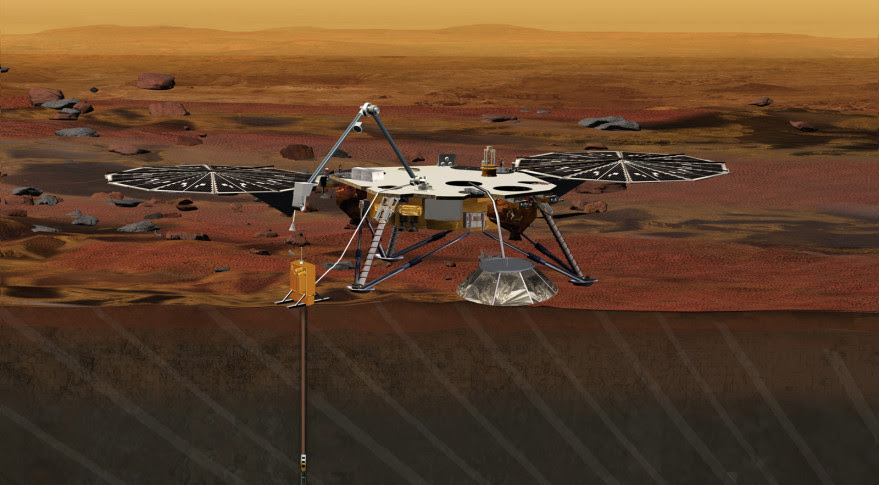 WASHINGTON — The explosion Sept. 1 that destroyed a SpaceX Falcon 9 rocket and its satellite payload took place not during a launch attempt but instead in a pre-launch test that is all but unique to SpaceX.
The explosion at Space Launch Complex 40 at Cape Canaveral Air Force Station occurred while the Falcon 9 was being filled with liquid oxygen and kerosene in preparation for a static-fire test, where the rocket’s nine first stage engines are briefly ignited on the pad a few days before the scheduled launch.
The static-fire tests have been a standard part of pre-launch preparations for Falcon 9 launches throughout the vehicle’s history. They are intended to serve as full dress rehearsals for launches and also verify the performance of the first stage engine.

Carmanah, a Canada-based producer of energy-optimized LED solutions for infrastructure, has signed a far-reaching agreement with Globalstar to collaborate on the design and manufacture of new solar-powered M2M satellite solutions as well as use of the operator’s satellite constellation for remote connectivity for all strategic Carmanah products. As part of the multi-year supply agreement, Carmanah will design, develop, and supply the next generation of Globalstar devices incorporating solar power charging capabilities.
“Many of our customers are interested in broadening the data capture and increasing the frequency of data transmissions from their mobile assets. When available, our new solar powered devices will support larger and more frequent data transmission capability and, most importantly, have a much longer field life than our current devices” said Dave Kagan, president and COO of Globalstar.

Marlink has doubled the burst speed on its Sealink VSAT services, enabling up to 3 Mbps for users on its data allowance packages. New 40, 60 and 80 Gigabyte (GB) data allowances have been introduced in parallel to the burst speed increase, enabling users with high bandwidth requirements to extend their smart shipping and crew welfare strategies.
Combined with the potential for faster internet access, the new Sealink allowances enable significantly more capacity for smarter operational efficiency and enhance crew data communications while providing access to social media and web browsing. Sealink allowances combine up to four voice lines with eight data allowance plans available from 1 GB up to 80 GB per month.

Startup to Use CubeSats for IoT and Inter-Satellite Communications

Kepler Communications, a small satellite startup, is designing a constellation of CubeSats for Internet of Things (IoT) and inter-satellite communications services. The company last month announced $5 million in capital raised through an oversubscribed seed round, along with plans to potentially deploy an initial service in the second half of 2017.
Kepler’s goals are to provide a vastly improved IoT backhaul for customers on the ground, as well as real time access to satellites in the same orbit. In an interview with Via Satellite, Co-Founder and CTO Wen Cheng Chong said the fresh capital has given the company the means to start building out its system.
“This $5 million allows us to launch our pilot service,” he said. “This means two satellites will go up by the end of next year. In the meantime we’re securing contracts with launch providers, signing with bus suppliers and ground station suppliers so that we get to roll out a full network.”

SES and SpaceX have reached an agreement to launch SES 10 on a previously flown Falcon 9 orbital rocket booster later this year. The mission is currently scheduled for the fourth quarter of 2016 to put the satellite on its way to geosynchronous orbit for telecommunications services over Latin America.
“Re-launching a rocket that has already delivered spacecraft to orbit is an important milestone on the path to complete and rapid reusability,” Gwynne Shotwell, president and Chief Operating Officer (COO) of SpaceX, said in an Aug. 30 press release.
SpaceX previously announced intentions of reusing a rocket with a commercial customer earlier this year at the SATELLITE 2016 Conference & Exhibition. Elon Musk, CEO and chief designer at SpaceX,made similar comments in a NASA press conference this spring following the landing of the company’s second booster after launching a Dragon capsule to the International Space Station for the Commercial Resupply Services 8 (CRS-8) mission. SpaceX tweeted Aug 30 that the SES 10 mission will use that same booster from CRS-8. The NASA mission delivered roughly 3,200 kilograms, or 7,000 lbs of cargo to the ISS in Low Earth Orbit (LEO).

Braving intense radiation, NASA’s Juno spacecraft successfully completed its first low-altitude swing around Jupiter early Saturday, passing within about 2,600 miles of the giant planet’s cloud tops at a velocity of some 130,000 mph, the space agency said.
A single image posted on NASA’s Juno web page showed a half-lighted Jupiter and its great red spot, along with numerous atmospheric bands and swirls. Much higher resolution images are expected to be posted in the next few weeks as mission scientists process downlinked data and telemetry.