MAUNA LOA, Hawaii ─ A crew of six "astronauts" returned to Earth Sunday (Aug. 28), after a yearlong mock mission to Mars.
At about 9 a.m. HDT, on the barren slopes of the Mauna Loa volcano, the six crewmembers emerged from the domed white habitat they've called home for the last 12 months. The crew had no physical contact with anyone but each other, and had limited communication with friends, family and the outside world.
How did the crew feel upon their release? Christiane Heinicke, chief scientific officer and crew physicist, summed it up in one word: "Happyyyyy!". This is the fourth and longest isolation mission by the HI-SEAS program(which stands for Hawaii Space Exploration Analog and Simulation), run by the University of Hawaii at Manoa, and funded by NASA.

SpaceX's Dragon cargo spacecraft has safely splashed down in the Pacific Ocean off of Baja California, Mexico. The vessel returned to Earth with more than 3,000 lbs. (1,360 kilograms) of cargo and science experiments, including 12 mice.
The crewless spacecraft was released from the International Space Stationearlier this morning by NASA astronaut Kate Rubins and Japanese astronaut Takuya Onishi using the station's robotic arm. The spacecraft returned to Earth at 11:47 a.m. EDT (1547 GMT) today (Aug. 26), NASA officials said in a statement.
"Good splashdown of Dragon confirmed, carrying thousands of pounds of @NASA science and research cargo back from the @Space_Station,"SpaceX officials tweeted. 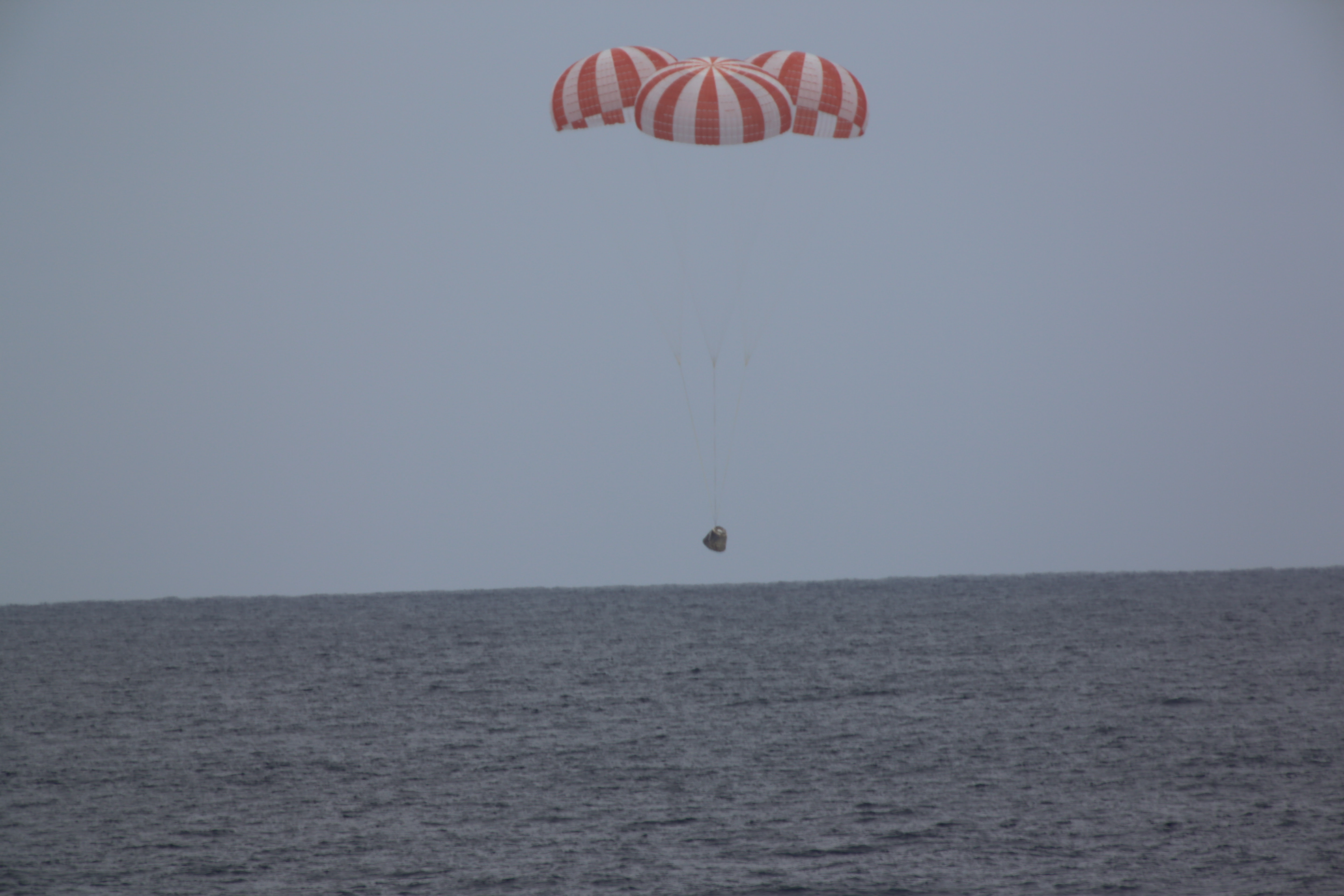 Mexico’s Ministry of Communications and Transportation has formally accepted the Mexsat satellite system from prime contractor Boeing following the completion of final field-testing, the company announced today. Mexsat provides 3G+ voice and data services to mobile terminals on land, air and sea for the enhancement of the country’s national security, civil and humanitarian programs. Telecomunicaciones de Mexico (Telecomm) operates the system on behalf of the government.
Boeing designed, integrated and delivered the system, which includes two satellites, two network and satellite control stations, associated network operations procedures, and prototype user terminals. The network was originally to consist of three satellites, however the second failed to reach orbit due to a Proton launch anomaly in May 2015.

SANTA FE, N.M. — NASA's next Mars rover will fly on the same version of the launch vehicle that launched its predecessor, NASA announced Aug. 25.
NASA awarded a contract to United Launch Alliance for the July 2020 launch of the Mars 2020 rover on an Atlas V 541. The total value of the contract, including payload processing and related services, is $243 million.
Mars 2020 is based on the Mars Science Laboratory mission, which landed the Curiosity rover on the surface of Mars in August 2012. That mission also launched on an Atlas V 541 under a contract awarded to Lockheed Martin, one of the parent companies of ULA, in June 2006 for $195 million, or approximately $232 million in current-year dollars. 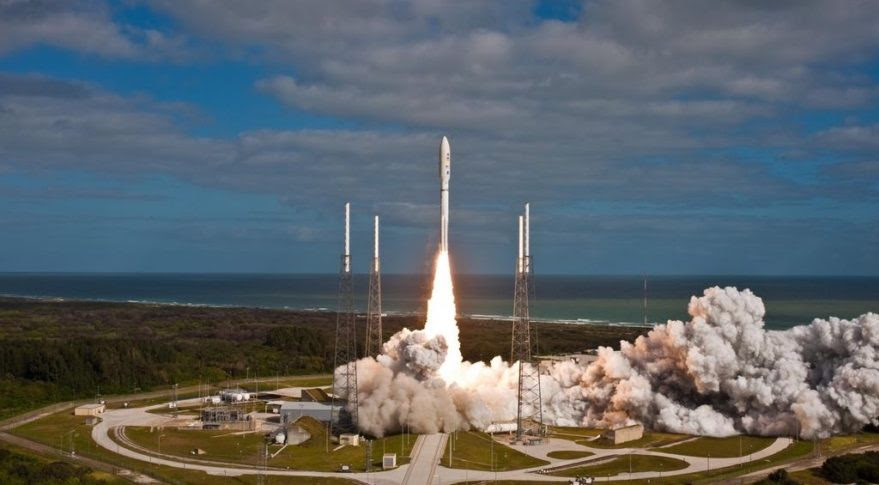 The Indian Space Research Organization (ISRO) completed an experimental mission using a scramjet engine on Aug. 28. The test used ISRO’s Advanced Technology Vehicle (ATV), a two stage spin stabilized sounding rocket with identical solid motors, as the booster to carry the engines. ISRO mounted the twin scramjet engines on the back of the second stage. The engines functioned for about 5 seconds as planned for the short duration test, with a hypersonic flight at Mach 6.
The experimental mission is a step toward the agency’s goal of realizing an air breathing propulsion system for a future space transportation system. The ISRO-designed scramjet engine uses hydrogen as fuel and oxygen from the atmosphere as the oxidizer. Some of the technological challenges handled during the development include hypersonic engine air intake, the supersonic combustor, development of materials withstanding very high temperatures, computational tools to simulate hypersonic flow, ensuring performance and operability of the engine across a wide range of flight speeds, proper thermal management, and ground testing of the engines.

Arianespace completed its heaviest mission ever with the Ariane 5 rocket Aug. 24, delivering two Intelsat satellites into Geostationary Transfer Orbit (GTO). The 41-minute mission delivered Intelsat 33e, the second of Intelsat’s EpicNG High Throughput Satellite (HTS) fleet, and Intelsat 36, a traditional satellite supporting media neighborhoods in Africa and the Indian Ocean regions. Together the satellites required a payload lift performance of 10,735 kg, topping the Ariane 5’s record of 10,730 kg set during the rocket’s previous flight in June.
Intelsat 33e deployed first, expanding Intelsat’s HTS footprint to cover Africa, Europe, Middle East and Asia from 60 degrees east. The satellite joins Intelsat 29e, launched in January this year, stitching together more C- and Ku-band capacity. Boeing built the satellite on the 702MP platform, which boasts what Intelsat refers to as the “most advanced digital payload on a commercial spacecraft.” A derivation of the system used in the U.S. military’s Wideband Global Satcom (WGS) satellites, the digital payload boosts security and flexibility, according to Intelsat, bringing the ability to seamlessly shift capacity based on customer usage needs in a particular region or timeframe.

Appareo Systems, LLC, and Iridium Communications Inc. ( NASDAQ : IRDM ) announce the release of technology that can equip motorized farm vehicles with terrestrial and satellite communication capabilities, enabled by the global Iridium® satellite network.
Appareo, a global leader in the development of innovative electronic and software solutions for advanced machine control systems and sensing equipment, has been working with Iridium to deliver wireless satellite connectivity for the products and systems it develops. Iridium operates the largest commercial satellite network, spanning the entire globe including polar regions. As part of a long-term development and supply agreement with Iridium, Appareo integrates the Iridium 9603 chipset -- the world's smallest commercial two-way satellite transceiver -- into a range of products. The company recently received certification from Iridium on a new device containing the Iridium 9603 chipset: a machine gateway designed in partnership with AGCO Corporation

Honeywell’s JetWave hardware has received final certification from Inmarsat, meaning the GX Aviation solution can be brought to the aerospace market.
The JetWave hardware is a key enabler in allowing passengers and crew members to connect to the GX Aviation network, which promises a fast, reliable home-like broadband service that performs consistently throughout the flight.
The hardware had previously received certification from the Federal Aviation Administration and European Aviation Safety Agency for its environmental, safety and installation standards. This latest approval from Inmarsat confirms that JetWave operates as planned throughout different environmental conditions with the Global Xpress satellite network.