Blue Origin successfully flew its New Shepard suborbital vehicle for the third time in four and a half months April 2 as the company moves closer to commercial operations of the vehicle.
The vehicle lifted off from the company’s test site shortly after 11 a.m. Eastern time, according to a series of tweets by company founder Jeff Bezos. The vehicle’s propulsion module, the same one that flew earlier test flights in November and January, made a successful powered landing, he said. Its crew capsule, flying without people on board, parachuted to a safe landing.
The vehicle reached a peak altitude of nearly 103.4 kilometers, slightly above the “von Karman line” frequently used as the boundary of space and similar to previous test flights.

Global mobile satellite communications provider Inmarsat (LSE:ISAT.L) on Wednesday launched its highly anticipated Fleet Xpress, a new service that promises a “new era” in maritime satellite communications and guaranteed high-speed connectivity from anywhere on the world’s oceans.
The service is the first globally available, high-speed broadband service for maritime and offshore operators available from a single communications provider.
“Fleet Xpress is a ground-breaking new service that will shape communications at sea beyond recognition,” said Ronald Spithout, Inmarsat Maritime President.
“Through Fleet Xpress, ship owners and operators can experience unparalleled levels of performance and simplicity. It will provide the guaranteed high-speed connectivity that is essential to support the safest and most efficient vessel operations, anywhere in the world. While, in parallel, it will match the personal connectivity needs of even the most demanding modern seafarer, delivering services previously available only on shore,” Spithout added.
Fleet Xpress is based on Inmarsat’s new Global Xpress (GX) satellite constellation, combining the high data speeds of Ka-band with the ultra-reliable FleetBroadband L-band service for unlimited backup. The service is also fully integrated so it can switch automatically between Ka-band and L-band, ensuring an ‘always on’ guaranteed connection with a committed information rate.

The Massive Flood of Bandwidth - Analysis and Impct

Satellite market analysts predict that demand for bandwidth is soaring. Despite the
enormous planned increase in satellite capacity, many industry analysts predict all will be well. Soon they say, we will connect every ship, airplane, living being, electronic appliances and toothbrush to the Internet. Add the bandwidth required for ultrahigh definition TV and defense, and the industry will flourish. Historically, this sort of optimism has had many different faces.

In 1979, I sat in a room full of energy analysts in Houston and listened to presentation after presentation projecting a never ending rise in the oil price. All of their graphs pointed upward. Guess what? Shortly thereafter the price stopped rising; the oil service industry went bust, and we were all out of work. 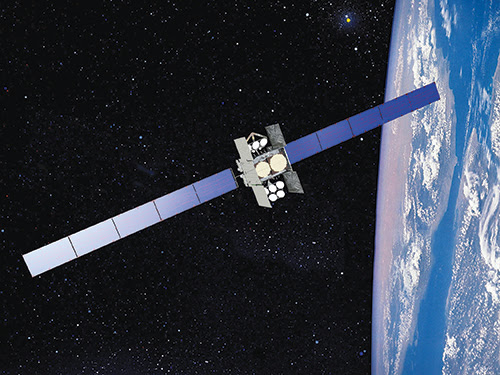 WASHINGTON — United Launch Alliance engineers investigating a premature engine shutdown on the recent launch of a Cygnus cargo spacecraft have narrowed the cause of the anomaly to the vehicle’s first stage fuel system, the company announced March 31.
In a statement, ULA said the investigation into the March 22 incident, where the first stage shut down six seconds early, was ongoing, but that teams have developed “initial fault trees” to track down the cause of the problem.
“The team has been successful in isolating the anomaly to the first stage fuel system and its associated components,” the company said in the statement, but offered no additional details on what caused the anomaly. 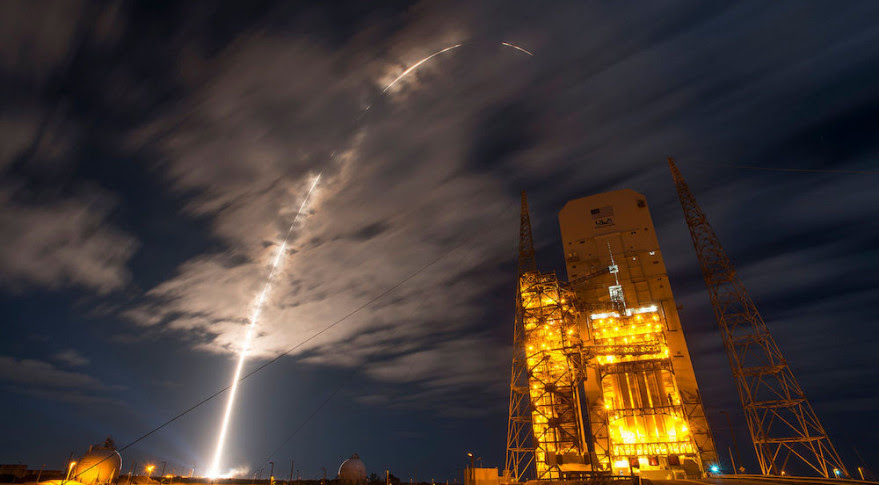 Fairchild Freight, a truckload carrier specializing in the transportation of consumer food commodities throughout North America, has selected Orbcomm to provide its dual-mode cold chain telematics solution to track and monitor refrigerated trailers. The solution will provide Fairchild Freight with temperature, fuel management and maintenance data for its refrigerated cargo. The company will fully integrate this data with its proprietary back-office platform to optimize temperature compliance and asset utilization.
Orbcomm will provide both satellite and cellular connectivity through hardware and a Web-based reporting platform for optimal fleet management. Additionally, Fairchild Freight will be one of the first customers to leverage Orbcomm’s integration with PeopleNet’s fleet performance monitoring platform, providing Fairchild Freight visibility to more asset classes on one comprehensive platform.

BEAM Inflatable Habitat to Launch to Space Station Next Week

An inflatable room that will be attached to the International Space Station (ISS) is scheduled to launch toward the orbiting laboratory next week.
The room, known as Bigelow Expandable Activity Module (BEAM), was built by Bigelow Aerospace, a private company that has built other expandable space habitats in the past and has plans to continue to do so. BEAM will be the first such room to be tested on the ISS, and the first to be (briefly) occupied by astronauts.
BEAM will not be a fully functional addition to the space station. However, astronauts will enter it for a few hours at a time — about four times a year for two years, Bigelow representatives said in a NASA media teleconference yesterday (March 28). However, sensors inside BEAM will allow Bigelow engineers to test its durability against radiation and debris and make sure it meets safety standards set by NASA for any habitat that will house astronauts. 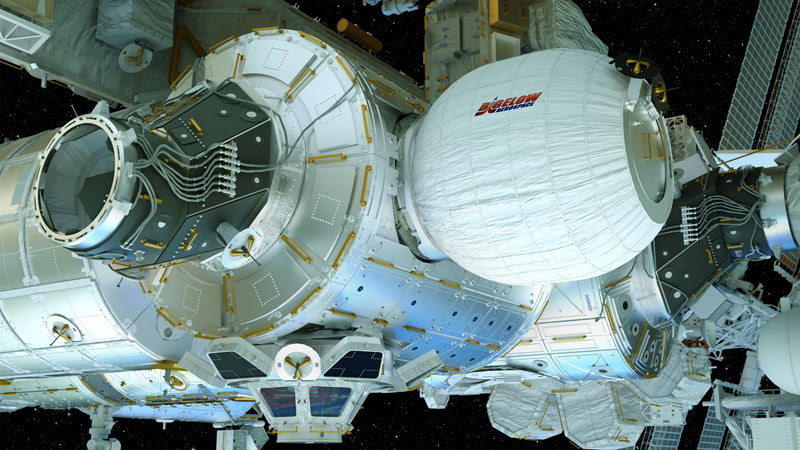 Hispasat and Quantis’ Moroccan subsidiary Nortis have reached an agreement with Gaes Titan Desert by Garmin — a multi-stage mountain bike challenge — to become the race’s technology sponsors and provide needed satellite connectivity for the competition. This agreement will facilitate communications for the race’s organizers and for journalists.
The race takes place in the Moroccan desert, and the camps are located in remote areas where there is no terrestrial connectivity. Gaes Titan Desert by Garmin will have satellite Internet at their camps this year, allowing participants to connect with friends and family and to update their social network profiles. The race’s management will also use these Internet services as a security tool, and will allow the more than 20 media organizations covering the competition to send information, photos and videos, including live streaming, to their respective media outlets.

An unmanned Russian cargo ship packed with 3 tons of supplies launched toward the International Space Station Thursday (March 31), beginning a two-day orbital delivery flight.
The Progress 63P spaceship is the third vehicle to launch to the space station in the past three weeks, and the second cargo craft to launch there in nine days. The ship's cargo includes 1,940 lbs. (880 kilograms) of propellant, 110 lbs. (50 kg) of oxygen, 926 lbs. (420 kg) of water and 3,161 lbs. (1,434 kg) of dry cargo, NASA officials said. The craft blasted off at 12:23 p.m. EDT (1623 GMT) from the Baikonur Cosmodrome in Kazakhstan, and was quickly concealed by a cloudy sky as it accelerated upward.
"[It's] a flawless ascent to orbit for the Progress resupply vehicle, the second in as many weeks to head to the International Space Station, with a third resupply ship, the SpaceX Dragon cargo craft, scheduled for launch on April 8," NASA spokesperson Rob Navias reported from Mission Control Houston during a NASA TV broadcast. 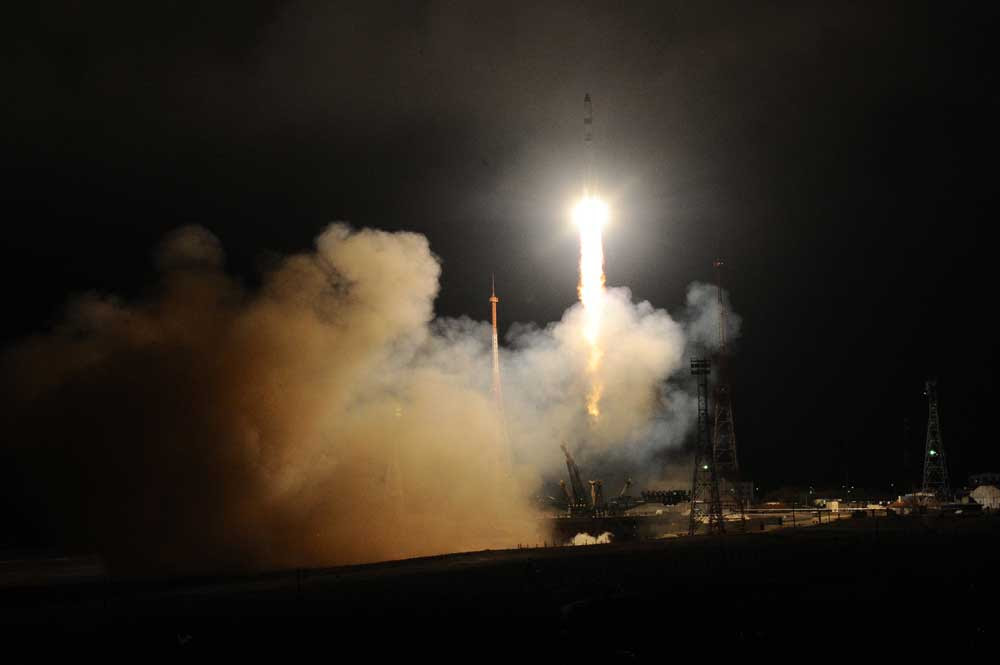 European Space Agency began the construction of Phase One of a data highway in space, by saying a laser-equipped satellite into space on Friday.The European Space Agency a new laser terminal into orbit as part of broader efforts to Europe’s first optical communication develop network started to monitor a system capable of natural disasters and other catastrophes.
The new satellite can be used for many things to help the collection of up-to-date data on the environment, first responders in a disaster. They might even be useful in the prosecution of piracy or pollution. In short, they could save lives.
The new network collects images and data from these older satellites closer to Earth and passes this information to the earth then.