Soyuz Crew Enroute to International Space Station
Two experienced fliers and a space newbie — the first British astronaut to visit the International Space Station — launched spaceward on a Russian rocket today (Dec. 15) to begin a six-month science mission on the laboratory in orbit.
At 6:03 a.m. EST (1103 GMT) today, American astronaut Tim Kopra of NASA, British astronaut Tim Peake (of the European Space Agency) and Russian cosmonaut Yuri Malenchenko lifted off from the Baikonur Cosmodrome in Kazakhstan on a 6-hour journey to the space station. Malenchenko, a veteran of six spaceflights (including trips to the station as well as to Russia's Mir space station), is commanding the Soyuz TMA-19M spacecraft. The crewmembers are part of Expedition 46 mission to the International Space Station, and will remain onboard for Expedition 47. 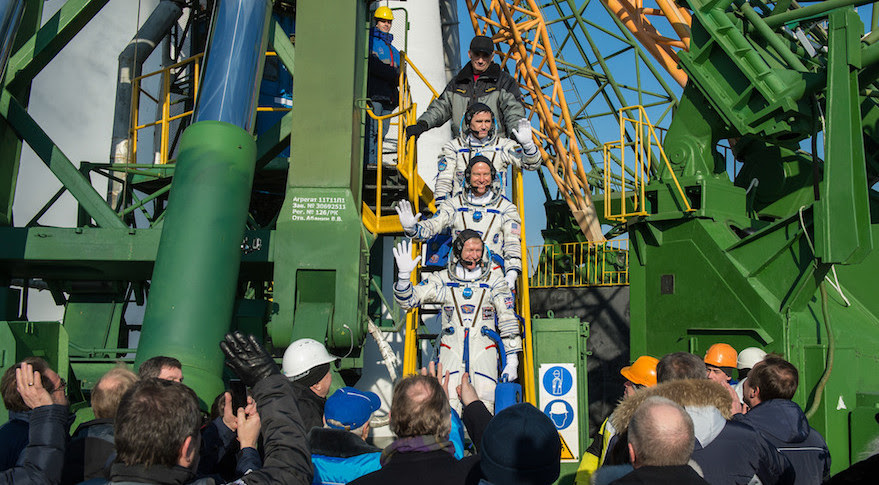 Thales Alenia Inks Deal To Build 2 More Sentinel Satellites for ESA
ROME — The European Space Agency on Dec. 15 contracted with Thales Alenia Space to build two C-band radar satellites, Sentinel-1C and Sentinel-1D, as part of the European Commission’s Copernicus Earth observation system.
The contract, valued at 402 million euros ($441 million), will help guarantee the promised data continuity of the multibillion-euro Copernicus effort, which includes 15 satellites performing a range of Earth observation missions.
The Sentinel-1A satellite was launched in 2014 and the identical Sentinel-1B is scheduled for launch in April aboard a Europeanized Russian Soyuz rocket. Each is designed to operate for at least seven years in polar low Earth orbit, with sufficient fuel to last for 12 years.


FAA Advisory Group Endorses “Moon Village” Concept
WASHINGTON — A Federal Aviation Administration advisory committee has recommended that the FAA start discussions with the European Space Agency about commercial participation in an international lunar base concept promoted by the agency’s leader.
The FAA’s Commercial Space Transportation Advisory Committee (COMSTAC) unanimously approved a recommendation that the FAA’s Office of Commercial Space Transportation begin discussions with ESA on ways American companies could participate in what’s known as “Moon Village.” The vote was conducted by email after COMSTAC held a meeting via teleconference on the topic Dec. 10, committee chairman Mike Gold said Dec. 15.
The recommendation states that the FAA, “after consulting with the appropriate U.S. agencies, engage directly with ESA in support of the ‘Moon Village’ concept, with the goal of fostering the participation of U.S.-based commercial entities in the planning and creation of the ‘Moon Village.’”

SpaceX Preparing for Launch of “Significantly Improved” Falcon 9
WASHINGTON — SpaceX is gearing up for both the first launch of its Falcon 9 rocket since a June launch failure and the first flight of a “significantly improved” version of the vehicle, but questions remain about the company’s plans to attempt to recover the rocket’s first stage.
SpaceX is planning a static fire test of the Falcon 9’s first stage engines on its launch pad at Cape Canaveral, Florida, on Dec. 16. If successful, that test would clear the way for a launch attempt “about three days later,” or Dec. 19, between 8 and 9 p.m. Eastern, according to a Dec. 10 press release from Orbcomm, the launch’s customer.
SpaceX has released few details about launch preparations, but Orbcomm said in a Dec. 14 statement that the 11 second-generation spacecraft being launched had been attached to the satellite dispenser and placed inside the rocket’s payload fairing. That statement indicated that the static fire test was still scheduled for Dec. 16. SpaceX spokesman John Taylor said Dec. 15 that the company was not disclosing when during the day the test would take place.

NASA Receives $19.3 Billion in Final 2016 Spending Bill
WASHINGTON — The final version of a fiscal year 2016 spending bill will provide NASA with nearly $19.3 billion, funding most agency programs at or above the administration’s original request.
The omnibus spending bill, released by House and Senate appropriators early Dec. 16 after extended negotiations, allocates $19.285 billion to NASA for fiscal year 2016. That total is $756 million above the administration’s requested budget and the total provided the agency in a House spending bill passed in August. It is nearly $1 billion above a Senate bill that appropriators approved in June but was never passed by the full Senate.
That increased spending, enabled by a budget bill passed in October that raised overall spending caps for discretionary programs, allowed appropriators to avoid long-standing debates about agency spending priorities by funding most programs at, or in some cases well above, the administration’s request.

NASA Reviving Effort To Put Spare Orbiting Carbon Observatory Sensor on ISS
SAN FRANCISCO — With funding in the 2016 omnibus spending bill approved by House and Senate appropriators, NASA will be able to revive Orbiting Carbon Observatory-3, a dormant effort to measure carbon dioxide in Earth’s atmosphere.
The OCO-3 program,  using an instrument leftover from NASA’s campaign to build the free-flying Orbiting Carbon Observatory-2 launched in 2014, will track carbon dioxide from its perch on the exterior of the International Space Station.
The project, which was on hold due to a lack of funding, is back in the budget because NASA’s Earth Science Division will receive nearly eight percent more money in 2016 than it did in 2015 if the congressional budget pact is signed by President Barack Obama. “We hopefully will launch OCO-3 in the 2018 timeframe,” Michael Freilich, NASA’s Earth Science Division director said Dec. 16 during his annual Town Hall meeting at the American Geophysical Union conference here.