First Iridium NEXT Satellites to Launch in April

TYSONS CORNER, VA, November 13, 2015 — Iridium Communications (Nasdaq: IRDM) has moved back the launch schedule for the first two Iridium NEXT satellites in order to fix an issue discovered on the Ka-band transmit-receive modules, ExecutiveBiz reported Thursday.
Spaceflight Now reported Tuesday the satellites will launch instead in April after prime contractor Thales Alenia Space discovered the “bug” during tests.
“[A] resistor needs to be changed in the circuitry, and then the component can be re-installed on the first two [spacecraft] and certified through another round of testing,” said Iridium CEO Matt Desch.

With images like these, it's no wonder California — not to mention the Twittersphere — freaked out Saturday evening when an unannounced test of a submarine-launched Trident missile lit up the evening sky.
Photographer Porter Tinsley and her wife were on the shore of California's desolate Salton Sea taking long exposures and time lapses with three different cameras when they witnessed what they thought at the time was a chemical or nuclear weapon detonating over Los Angeles two and a half hours to the west.
The pyrotechnics Tinsley and thousands of other casual skywatchers observed Saturday were due to the first of two Trident 2 D5 missiles with dummy warheads the U.S. Navy test fired between Saturday evening and Monday afternoon. The big, bright flash some mistook Saturday for a detonation, missile intercept or UFO is actually the result of the solid-fueled Trident missile jettisoning one of its three stages. 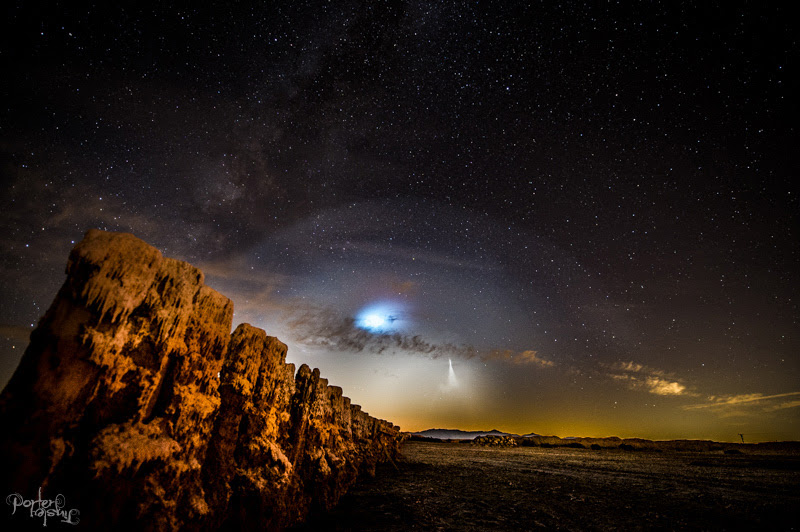 This footage was collected by a team of scientists working with SETI, the United Arab Emirates Space Agency, the InterActiveCorp, and other institutions.
To get such a close look, some of the team members hopped on a plane so they could be in the air at the time WT1190F entered the atmosphere. Of course, they were flying at a safe enough distance from the object that it posed no threat to their aircraft.
WT1190F re-entered Earth's atmosphere over a patch of Indian Ocean off the Sri Lankan coast, which meant that only people located in the southern province of Sri Lanka had a chance to spot it.

Fidelity Raises Estimate of SpaceX Stake
Fidelity's downgrading of Snapchat and other investments has understandably drawn a lot of attention, but not every company that Fidelity is invested in has had its value cut. Fidelity has actually boosted its valuation of Elon Musk's SpaceX, in which Fidelity invested $7.54 million in January.
SpaceX was valued at about $12 billion in that January round, which also included a major investment from Google. Now Fidelity has written up their own investment by 15 percent—as Fortune notes in a chart here—suggesting that SpaceX's valuation is even higher than previously reported.
As to why SpaceX would see its value go up amid a drop by other companies, it likely has a lot to do with Musk himself and how he has outlined his plans for SpaceX. While Musk has made pitches for long-term things like exploring Mars, it's ideas like a network of Internet-providing satellites that likely keep Fidelity feeling optimistic. The possible revenue from a network of satellites capable of providing high-speed Internet access anywhere on Earth is enormous. And now that the factory for building satellites is coming together, it may be relatively soon that Fidelity starts seeing some return on its investment.

Air Force Funds 3-D Printing Study for Rocket Engines
WASHINGTON — The U.S. Air Force awarded the Johns Hopkins University’s Whiting School of Engineering a $545,000 contract to study additive manufacturing techniques to make cooling chambers for liquid rocket engines, according to a Nov. 4 press release from the Air Force’s Space and Missile Systems Center.
The contract is part of a broader effort to end reliance on a Russian rocket engine that powers United Launch Alliance’s Atlas 5 rocket, which is used to launch a majority of U.S. national security satellites.
In 2014, Congress banned the future use of Russian engines as tensions with Moscow escalated over Russia’s incursions into Ukraine. Congress also allocated funding to develop a U.S. alternative to the RD-180, but the Air Force hopes to fund work on a brand new rocket as part of its broader strategy to have competition in military launches. 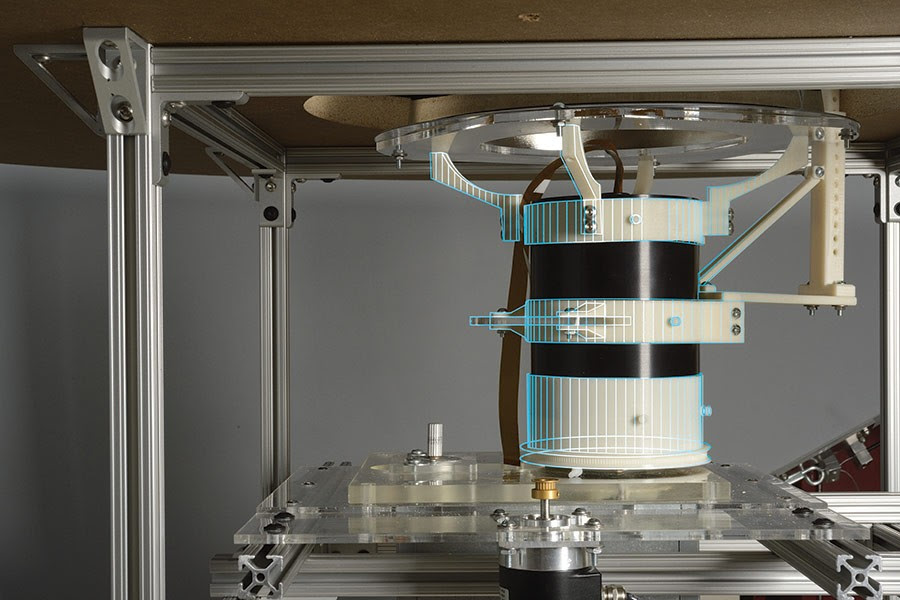 This week, SpaceX successfully tested the engines it will use in its Crew Dragon, the spacecraft it's building to transport NASA astronauts to the International Space Station. The engines, called SuperDracos, were fired up 27 times at the company's test stand in McGregor, Texas. The SuperDracos are meant to help to carry the spacecraft to safety in case something goes wrong during launch.
SpaceX is building the Crew Dragon for NASA through the agency's Commercial Crew Program, which tasks private companies with shuttling astronauts to and from the ISS. The Crew Dragon, which can hold up to seven passengers, is designed to travel to the station on top of a Falcon 9 rocket. SpaceX has successfully flown its Falcon 9 to the ISS many times before, but sometimes accidents happen. This past June, for example, one of the company's rockets exploded en route to space. If a Falcon 9 were to explode during launch with people on board, both NASA and SpaceX want to make sure the astronauts can escape the rocket as quickly as possible.

PARIS — Europe's heavy-lift Ariane 5 rocket on Nov. 10 successfully placed telecommunications for Arabsat of Saudi Arabia and the Indian Space Research Organisation (ISRO) in the vehicle's sixth and final launch for 2015 and its 69th consecutive success.
Builders of the Arabsat 6B/Badr-7 and GSAT-15 satellites said the spacecraft were healthy in orbit and sending signals.
The launch, from Europe's Guiana Space Center on the northeast coast of South America, kept launch-service provider Arianespace on track to conduct a record 12 missions this year. Two more campaigns, one with the light-lift Vega rocket and one with the medium-lift Europeanized Soyuz vehicle, are scheduled in November and December.

U.S. Senate Passes Compromise Commercial Space Bill
WASHINGTON — The Senate passed Nov. 10 the final version of a commercial space bill that extends two key regulatory provisions and provides limited property rights for resources extracted from asteroids.
The Senate approved by unanimous consent H.R. 2262, the U.S. Commercial Space Launch Competitiveness Act. The bill reconciles a House bill, originally known as the Spurring Private Aerospace Competitiveness and Entrepreneurship Act of 2015, passed in May with a Senate bill approved in August.
The final bill includes lengthy extensions of two provisions of commercial launch law that were scheduled to expire next year. It extends through September 2025 government indemnification of third-party damages from commercial launches beyond a “maximum probable loss” amount launch providers must ensure against. That indemnification was scheduled to expire at the end of 2016. 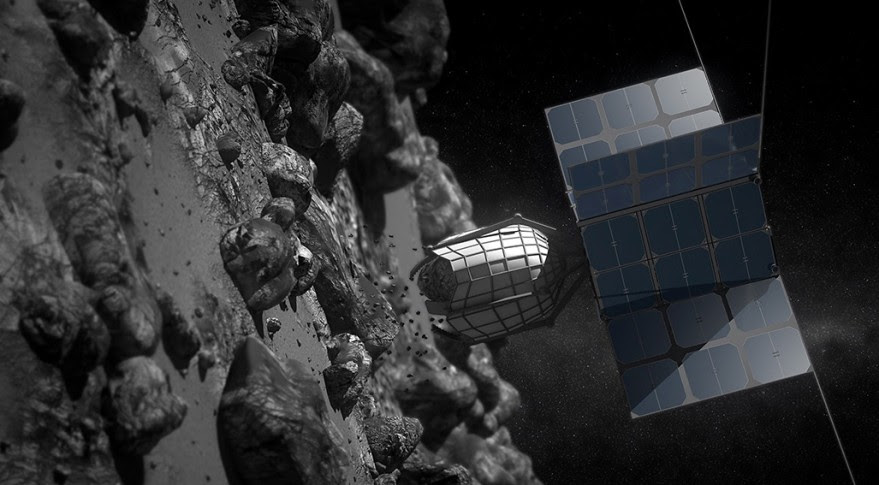