Developers Are Invited By Inmarsat To Attend IDC 16

Inmarsat will convene the firm's second annual Inmarsat Developer Conference (IDC 16) at the Park Plaza Hotel in London on February 29 to March 1, 2016, following a highly successful inaugural event.
Software, hardware and application developers are invited to attend and hear from prominent industry experts, including Ford and SpaceX, and to discover more about the latest development opportunities for the creation of innovative solutions using Inmarsat’s L-band and Global Xpress (Ka-band) networks.
Inmarsat’s open technology strategy, announced in January of this year at the first IDC, has given the growing developer community the freedom to use Inmarsat technologies to develop innovative and bespoke applications, based on cutting edge technology. The latest development opportunities are set to be unveiled at the industry event next year.

Turkey and Football: How Astronauts Celebrate Thanksgiving in Space

Thanksgiving in space will be a lot like the holiday down here on the ground — minus the gravity, of course.
Like most Americans, NASA astronauts Scott Kelly and Kjell Lindgren have Thanksgiving (Nov. 26) off, and they'll spend the day aboard the International Space Station (ISS) watching football and enjoying a turkey-centric feast, agency officials said.
Kelly and Lindgren gave viewers a look at that feast in a special Thanksgiving video this week, breaking out bags of smoked turkey, rehydratable corn, candied yams and potatoes au gratin. Lindgren tore off a chunk of turkey and took a bite on camera.

LONDON — A U.S. National Oceanic and Atmospheric Administration satellite retired in 2014 has suffered an apparent breakup, the second time in less than a year that a polar-orbiting weather satellite has generated orbital debris.
The Joint Space Operations Center (JSpOC) announced Nov. 25 that it had identified a possible breakup of the NOAA 16 satellite. The center, which tracks objects in orbit and warns of potential collisions, said it first detected the breakup at 3:41 a.m. Eastern time and was tracking an unspecified number of “associated objects” in the orbit of NOAA 16.
JSpOC said later Nov. 25 that the debris from NOAA 16 posed no current threat to other satellites in orbit. It added that it did not believe the debris resulted from a collision with another object, suggesting that NOAA 16 broke up on its own.


Could Iridium Communications Inc Rise Even More? The Stock Had Another Big Increase Today

The Lebanese Red Cross, the sole provider of emergency medical services in Lebanon, is deploying 125 handheld Spot Gen3 safety devices from Globalstar subsidiary Globalstar Europe Satellite Services to enhance the safety of its workers.
The humanitarian organization will be using Spot Gen3 to track the location of its volunteers and search and rescue teams as they respond to emergencies. Spot devices can be quickly set up to automatically report the user’s location at regular intervals using a “check-in” button, which sends a prepared message to Lebanese Red Cross headquarters indicating that all is fine. Red Cross managers can also install the Spot app on their smartphones and tablets to read messages and see where each volunteer is located using Google Maps.

The private spaceflight company Blue Origin just launched itself into the history books by successfully flying and landing a reusable rocket.
Powered by the company's own BE-3 engine, the rocket kicked off the launchpad yesterday (Nov. 23) at 11:21 a.m. Central Time, carrying the New Shepard space vehicle. The stunning feat was captured in an amazing test flight video released by the company.
Shortly after liftoff, the rocket separated from the vehicle. In the past, a spent rocket would fall back to Earth like a stone, having completed its one and only flight.

ExoMars Work at Frenzied Pace To Make 2016 Launch Date
CANNES, France — Europe’s two-launch ExoMars mission to Mars in 2016 and 2018, which has run a budgetary obstacle course from the start, remains in deadlined-stressed mode with triple-shift work days on the eve of first mission’s shipment to Russia’s Baikonur Cosmodrome to prepare for a March launch, government and industry officials said Nov. 24.
Contrary to what several European Space Agency governments thought as they reluctantly financed the 1.2 billion-euro ($1.28 billion) ExoMars project — Europe’s principal space exploration mission — the industrial team led by Thales Alenia Space has been able to keep to the schedule and save the 2016 launch date.
A component defect discovered only this summer forced a slip in the schedule and the loss of the January launch window. But a backup date of March 14-25 has been secured on a Russian Proton rocket. Russia is ESA’s partner in ExoMars and is providing two Proton rockets for the launches, plus considerable scientific hardware for the 2018 mission. 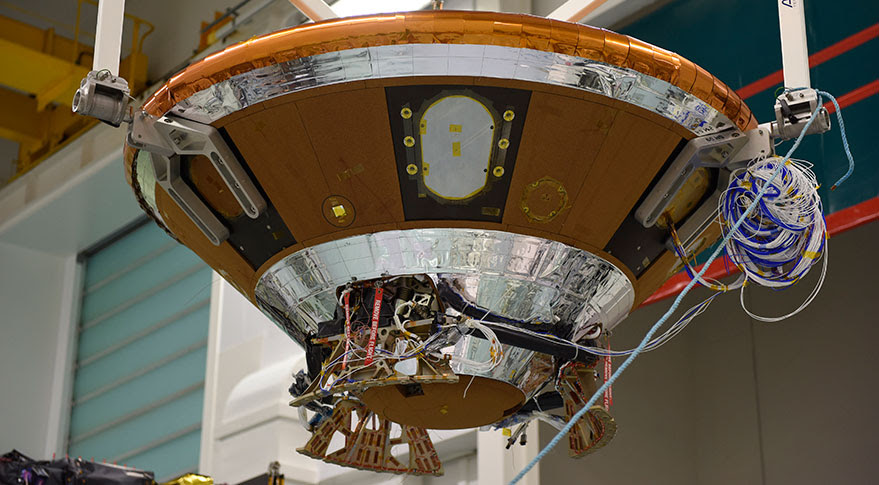 NASA’s Jet Propulsion Laboratory (JPL) in Pasadena, Calif., is working on a concept for a network of space-based sensors called FireSat in collaboration with Quadra Pi R2E, form San Francisco, Calif. FireSat would be a constellation of more than 200 thermal infrared imaging sensors on satellites designed to quickly locate wildfires around the globe. Once operational, FireSat would represent the most complete monitoring coverage of wildfires ever from space, according to NASA.
“While many wildfires are reported by 911 calls soon after ignition, some are not, and delays in detection can lead to rapid escalation of a fire, and dramatic growth of the cost of suppression. The system we envision will work day and night for fires anywhere in the world,” said Robert Staehle, lead designer of FireSat at JPL.